So after biopsy and because of radiation therapy and all that entails, I was very skinny but I carried on doing up my dwelling place and clearing the ground. And regularly I noticed that I was in a state of contemplation.
However, in 2003, the plot thickens and I am in relapse. Physicians exhorted me to choose surgery and chemotherapy: I refused at once.

It’s time to go on by other means. I then did some monastic retreats. I sold my house. I gave my ewes to a shepherd doing organic farming. And at last I settled in the Paris suburb of Chatou.
There, I prefered not to stay idle and I chose to be trained in alternative pedagogy in Steiner-Waldorf schools. Not for teaching later on but to better understand others, this time in interaction with children and teens. I also passed a master in sciences of education at Paris VIII University. 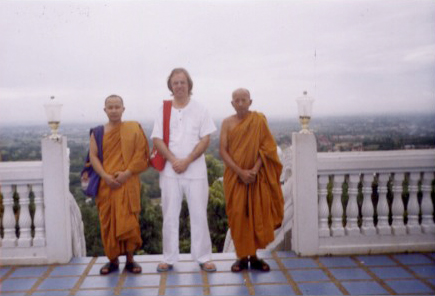 In the meantime, during summer 2004, rather weakened, I decided to dash off to Thailand, further to the invitation of a bodhisattva friend. Out there, at the beginning, tourism and fun but eventually I prefered meditating in a Buddhist monastery perched on a hilltop. Thus, I ended my stay dressed in white and bare footed.
At the year’s end, I finally accepted to undergo a chemo treatment at a rate of one drip a month for two and a half years. During treatment, a frozen helmet was placed on my skull so as to avoid hair loss.

In 2007, here am I at last back on track, the depression over. And rather than taking up a professional activity again and also hesitating between becoming a lay hermit in the mountains or a cloistered Benedictine monk, I in fact decided to pursue studies in the speciality that calls me to mind: religion and faith.

I found the appropriate learning at Louvain-la-Neuve University. I moved to this town and wished to rent a room in a seminary. The agreement was given to me. Therefore I rubbed shoulders with priests, seminarists and various students.

From theology, I slid into anthropology and undertook field researches that enabled me to encounter Catholic hermits and Buddhist hermits. In doing so, in 2013, just before reaching sixty years old, I got my PhD after writing my thesis in a monastery.

And after a few months  in Paris, I am once again living in Belgium and moored at the river port of Liège as I live on a motorboat.

As far as my writing is concerned, in January 2016, the editor Imago has published in French the report of my pilgrimage to the Thais Buddhist hermits’ meditation places (see Our books; in the pipeline, translation in English). The descriptive manuscript that relates my encounter with western contemporary Catholic hermits has also been edited in January 2017; the analysis of the overall field data was printed in May 2017. Regarding the Buddhist hermits, the book which explains the methodology and which proposes a thorough data analysis with numerous photos is to be published on June 2019 (See Nos livres).